I saw this on Tumblr and it hit all my favorite things:
– pirates
– sailing ships
– krakens
– creative photography 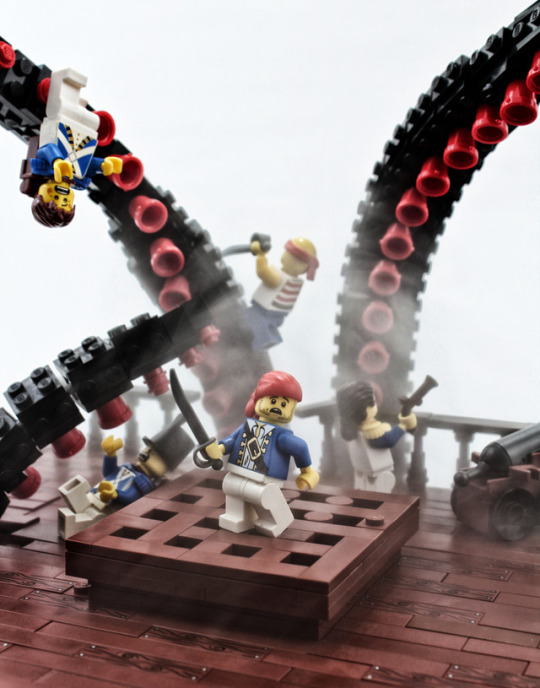 Visit Mark Falworth’s very creative site where he shows the importance of a good white box. I’m glad he doesn’t have some sort of photoshopped background, as I feel it would take away from the creativity of his Lego scenes.

Speaking of sailing ships, lets learn some interesting tidbits about them:
– each ship has a hull (watertight body/superstructure), rigging (ropes, cables & chains which support the ship), at least one mast to hold up the sails that use wind to power the ship

– people who crew the ship are called sailors or hands

– crews take turns to operate the ship, call the watch. Watches are typically 4 hours long, and a bell is rung to signify every half hour and eight times at the end of the 4-hour watch

Some commonly used ships in television shows and movies:
– Brigantine: has two masts, with the foremast square-rigged. It was a popular ship because it was swift and typically used for piracy, espionage and recon.

– Frigate: typically known as smaller ships built for speed and maneuverability. Prized for the ability to travel through shallow waters (whereas bigger ships couldn’t).

– Galleon: large, multi-decked sailing ships, that typically had three or more masts and were heavily armed. Used during the Age of Sail as the war vessel of choice. A versatile type of ship that was refitted for wartime and peacetime roles.

– Schooner: a smaller, swifter type of ship with a fore-and-aft sail on two or more masts. This type of ship was popular for activities that required speed, such as slaving, privateering, blockade running and offshore fishing. Similar to the frigate, it could travel in shallow waters and carry enough guns to intimidate merchant vessels.

If you are like me and love pirate lore and the Age of Sail, go visit some websites to learn some more!
Wikipedia
Military Factory
Age of Sail dot Net

If you love pirate games, there is a lot to be excited about, because in E3, they announced 2 pirate games: