So last week I wrote an article about Hurricane Harvey, and this week we’re looking at Irma with her little brother Anthony following right behind. While reading the article on Irma, I looked up a map of the area and found some interesting information:

This is where Key West is, which is basically a string of islands attached to the state of Florida.

I was looking and saw the city/town of Key Largo and made me think of Mar-a-Lago. If you follow the news AT ALL, it’s referred to as President Trump’s Away-from-Washington White House. That can be found between Fort Lauderdale (popular spring break location) and Boca Raton:

Conveniently a few minutes drive away from the Palm Beach International Airport and the same distance as his golf club.

I zoomed out of Google Maps and looked at the islands that Hurricane Irma was going to affect: 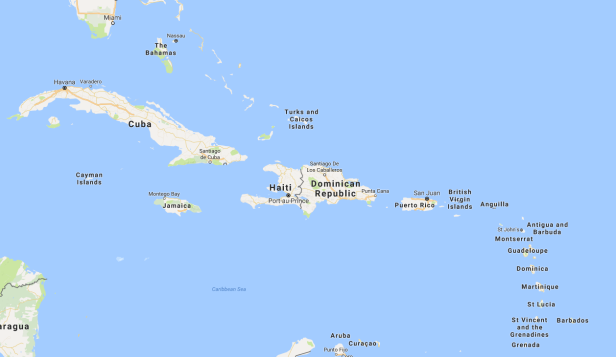 Looking at the map, I made the following observations:

– Key West in most maps, is nearly invisible, requiring us to zoom in quite a bit

– if so many lives weren’t being affected due to the hurricane news , we would be hearing talk of the North Korean threat of nuclear missiles possibly being able to hit the US West Coast. Cuba is quite a lot closer than North Korea is, and even with much older technology, they once had nuclear missiles provided by Soviet Russia to be used as a deterrent against US invasion.

– Haiti is attached to the Dominican Republic
– Haiti probably sounds familiar because there was an earthquake in 2010 with a magnitude of 7 (there is only one class higher of devastation), that caused over 100 thousand fatalities, and has been receiving humanitarian aid

– The Bahamas is much closer to the US (Florida in particular), than is Aruba or Barbados, both of which are very popular Caribbean vacation destinations
– Although incredibly close in distance to the US, it is not part of it; it was once a British colony, but now is an independent archipelagic state (a country comprised of a series of many islands)

– it is farther away, but Puerto Rico is an unincorporated territory (UIT) of the US; a UIT is an area controlled by the US government but is not part of the US. In Puerto Rico’s case, they lack the ability to vote for US Congress, but can move freely from the island to the mainland and are considered natural born citizen of the US
– other US UIT’s include Guam (in the Pacific, currently under threat of North Korean missile attacks), North Mariana Islands, US Virgin Islands (south of the British Virgin Islands) and American Samoa (in the Pacific Ocean, east of Australia)